DONATE TO THIS EVENT

"I would betray every slave, from the first to the last, and those former slaves who came under the Jim Crow system. I would betray all of them if I didn't stand up today and appreciate the life we have here in America. "That's the life they cried for, that's what they begged for, that's what they struggled for - a New Day!  A day when former slaves would be recognized and respected for what they are, and treated equally," he continued. "We have come to that day, and I would betray all of my slave parents if I didn't appreciate this America and this change that has taken place here in this America."

Imam Mohammed stated "Don't tell me I'm not happy. If you're not willing to carry this flag, you don't have to. I'll carry it!" Imam Muhammad declared and then hoisted the American flag up from its post and affirmed: "In your ancestors suffering and in your own suffering, you have earned a great reward! The only way you can get it is to embrace the truth! Put down your petty selfishness, your petty physical complaints, your petty racism and prejudices. Throw away your false self-righteousness, and you will stand up like a giant of this whole earth!"

During the years that followed, the New World Patriotism Day Celebration and Parade grew in statue and was held downtown on Michigan Avenue with participation from elected officials, mayors, marching bands, fabulous floats and various civic and community organizations.

The mantra of the Parade Committee in those days was: "We believe it is time to consolidate our energies and skills toward the survival of our cities and neighborhoods. Therefore, we are inviting all races, creeds, colors and religions to participate in this partnership for progress." 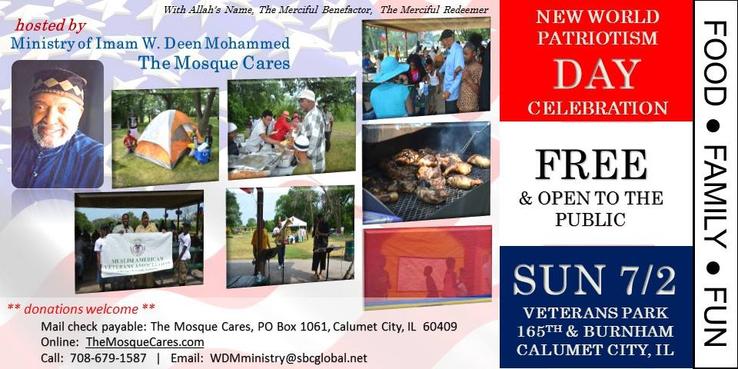 New World Patriotism Day - this tradition began July 1977, when Imam W. Deen Mohammed declared, "A great change has taken place here in America. People who just a hundred years ago couldn't stomach the sight of each other are now sitting down in the same companies, the same corporations, and working together as equals.  "I would be a fool not to recognize that I am living in a new day and in a new world."